Friday is July.  I can hardly believe it.  I know it’s summer because it’s hot, but I feel like it’s flying by.  I’m sitting in my kitchen, spooning up gelato because frankly it’s my favorite way of beating the heat.  That and with my long days at the winery, the last thing I want to do when I stumble in the door is cook.  And besides summer in Tuscany just lends itself to gelato.  It’s been really hot here these last few weeks.  As I give tours of the vineyard, melting tourists huddle under the shade of nearby mulberry bush while I regale them with everything they ever wanted to know about Sangiovese grapevines…and more.  The hardier souls who hale from warm climates brave the sun to snap a few photos of the rapidly growing grapes on the vines.  Their reward is a trip inside the cellar where they are greeted by cool temps and the pleasant aroma of aging wine.  And then of course the best part…the tasting.  I never knew I could like a job so much, but really working and learning about wine has been great.  I’m even thinking of taking a Sommelier course this winter.

The other thing I love about working at Poliziano is meeting such fun people.  I had clients a couple of weeks ago who had lunch with us and shipped a huge amount of wine back to NY…and then invited me and Fabio to their rented villa for dinner.  He didn’t go.  I did.  It was terrific.  Joan and Patti were a riot and I spent a wonderful evening with them and their husbands celebrating Joan’s birthday.  They grilled the huge steaks this area is known for and I of course brought some wine to accompany it!  It was a treat for me to spend some time with such fabulous New Yorkers.

Tomorrow I’m spending some time with some clients from Holland who come down every year to buy wine.  They are searching for some old photos of Montepulciano so Fabio and I spent an hour on the phone trying to track down someone who sells them in this area.  It was harder than you’d think.  The only problem after we located someone was that he doesn’t speak English and they don’t speak Italian.  So I’m off to some old man’s house in Sant’Albino to see what treasures he has unearthed and will play translator.

My teaching has dwindled this summer so I’m just doing a few lessons on the weekends.  This works well since it’s my only free time for writing, reading and spending some time with Cinder.  13 in two weeks she’s still hanging in there, but her back legs are getting worse. I’ve upped her arthritis medicine and I’m just hoping that she’s with me a while longer.  She’s had a good life, but selfishly I’m not ready to say goodbye yet!  Marinella has been keeping Cinder in her garden in the afternoons and so she’s been hanging out with Ozzy and five cats… and this week two deer that were abandoned and brought to her son’s veterinary clinic.  Next stop will be a reserve since they now couldn’t survive in the wild.

I’m still awaiting news on my memoir.  It’s been with an agent for almost two months so fingers and toes crossed for some good news. Send some positive vibes my way per favore!

Oh and I’ve been here two and half years now and I’ve had one visitor.  Hint hint…. 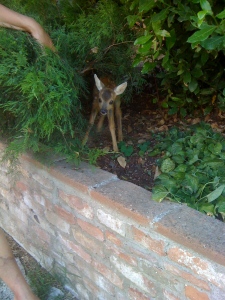