Before moving to Italy, my only exposure to the night of San Lorenzo was an Italian film called The Night of the Shooting Stars.  It’s a beautifully told story about war torn Italy and the folklore of wishing on the shooting stars on this particular night.  The shooting stars, which happen each year on August 10th (coinciding with the Perseid meteor shower) are said to represent the holy tears of San Lorenzo who was martyred in 258 AD.  (During his torture supposedly Lorenzo manged to quip “Turn me over, I’m done on this side,” and this is often quoted to explain why San Lorenzo is the Patron Saint of Comedians.)

It’s considered good luck to make a wish on one of the stars of San Lorenzo…not to mention a great excuse for a party.  In Montepulciano, the Calici di Stelle is a full day of feasting and festivities throughout the historic center of town.  I went with Bonnie and her family to Piazza Grande last night where we watched the Sbandieratori— this is a group of flag throwers that reenact a military like victory celebration to the accompaniment of drums and trumpets.   It’s an impressive display of precise movements, made even more so by the windy conditions in the piazza.  My student Michele was one of the drummers and I recognized one of the clerks from my supermarket as well!

After the flag throwing, Bonnie and I took the kids for gelato and pizza and then we made our way down the hill for the evening’s more adult festivities which involved wine from all the different enotecas.  Music went on well into the night and I noticed more than one shop that opened late this morning!  I’m told by Bonnie’s husband that the actual meteor shower has shifted over the years on the calendar to tonight so I hope to catch a glimpse  and, of course, make a WISH!

these guys were amazing! 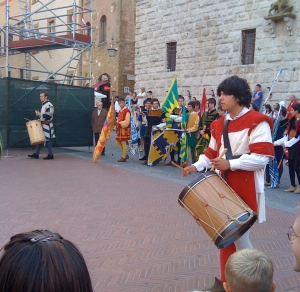 My student, Michele, playing the drum 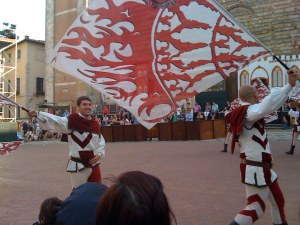 Men in tights with flags 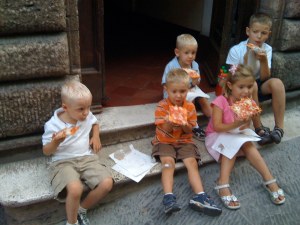 Enjoying some pizza after the flag throwing festivities