When I awoke this morning I was conscious of the fact that I was alone for the first time in over 15 years.  There was no sound of Cinder’s yawning, stretching and general head shaking to rouse me from sleep.  There was no pacing up and down the hallway, long toenails clicking away, making her morning routine sound like a tap dance.   My beautiful girl was gone.  The tears, which have been flowing freely since yesterday once again commenced.

The last year has been a roller coaster of ups and downs.  I thought last summer that Cinder had finally decided to leave me, but she’d hung on to see one more spring in Tuscany.  Next week makes four years living here.  And while it may be unusual for a Weimaraner to live to 15, I shouldn’t really be surprised.  All of my Italian neighbors seem to live well into their 90s, so it kind of makes sense that Cinder would get a couple extra years out of her retirement.  She was living with blurry vision from cataracts, had become almost completely deaf and her weakening back legs gave her a slope that resembled a German Shepherd.  And then there was the incontinence.  But she was still full of life.  And she still greeted me with amazement and delight each time I entered the house, even if I had only been gone ten minutes.  When telling my Italian friends yesterday that she had died, I used an expression that one of my friends here told me when her grandmother died: si è spenta.  Which basically means extinguished like a light or a flame.  And I think it’s an apt way of describing Cinder.  Because she really had been the essence of burning energy and light.

Our early years together were not easy.  We met in Miami where she’d been taken in by friends.  A rescue, she was an emaciated puppy, probably nine months old, all spindly legs and sporting that gaunt look famous among supermodels.  She was scared of everything, especially men.  I had more than one postman who looked on the verge of cardiac arrest when she would jump up on the screen barking.  She was full of energy and most of our walks were more like trots as I valiantly struggled to keep up with her.  She was quite horrible to my Labrador Miranda, always showing off her alpha status and making poor easy-going Miranda get off the couch or give up a toy.  It took a long time for us to establish a bond with Cinder because of this.  She moved in and definitely made her presence felt.  I haven’t had to set alarm since she entered my life.  If she was not up with the sun, she was up before it.

She went from Miami rescue, to city girl when we moved to New York.  She and Miranda, now best of friends, spent many happy years socializing in the dog park and learning how to pee curbside. She suffered the torture of me dressing her up for Halloween each year and she took on a maternal role with the other dogs that I used to walk and take care of.  Her royal bearing made many a puppy tow the line.  She loved the snow in New York and would bury her head in it like she used to do in the sands of the beaches of Miami.  We spent Sunday mornings walking off leash in wilds of Riverside Park.

And then Tuscany.   Some of my favorite reviews of At Least You’re in Tuscany have been by people who have called it a book about a girl and her dog.  I didn’t seek to include Cinder in the story as I wrote it.  It just happened naturally because she has been such a part of my life.  And I relied on her a lot especially in those first isolating moments of the first year here.  Cinder outlived boyfriends, some friendships, put up with my terrible PMS, and saw me through some of my toughest moments as well as my greatest joys.  She had a sense of comic timing and was really quite funny and expressive.   She was a cuddler even though she was big and even in the last months as her legs were getting worse, she would stand next to me, her big silky grey head on my leg as I worked on my computer.  She slept a lot in the last year.  Only the scent of roasting chicken or baking sugar cookies would rouse her immediately from her naps, which were getting longer and longer.

In the last two weeks or so I could see she was starting to really labor when walking.  Marinella once again was taking her out when I started back to work at Poliziano, and she too noted that our time was nearly up.  I resolved that when she couldn’t get up, we would say our goodbyes.  We had a beautiful afternoon together on Friday.  I took her little mat outside and we soaked up the strong Tuscan sunshine in our parking area.  We were both lizards, happily lazing and enjoying the gorgeous scents of spring.

And then Saturday morning she didn’t get me up.  I woke up anyway on schedule ready to take her out for a pee, my body now on a sleep cycle usually reserved for nursing mothers.  I heard her struggle from her bed and then saw that her legs had finally had enough.  She was shaking and breathing hard and I could tell she was scared.  I sat with her for hours, soothing her, this time resting my head on hers.  Marinella’s son Giacamo, who is our veterinarian, came to us in the late morning and we agreed that it was time to let her go.  I sat with her in my lap as she drifted off to sleep, thanking her for being such a wonderful companion for these many years and telling her it was okay to go.  Miranda was waiting for her.

So now I am here in my empty house keenly feeling her loss.  This is one chapter of my life I have been dreading to start…

Cinder sunbathing while I studied for my sommelier course

1st Christmas in NYC. For some reason I thought it would be cute to make the girls wear I ♥ New York t-shirts.  They were troopers!

Our cozy apartment in the Big Apple

Cinder shows off her sexy side with feather boa… 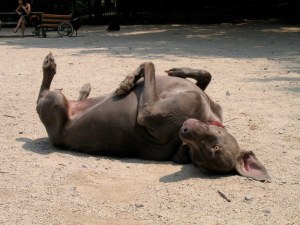 After a bath, it’s best to roll in the disgusting dirt of the dog run. Repeat until the clean smell is but a distant memory.

You can blame William Wegman for these next photos!! 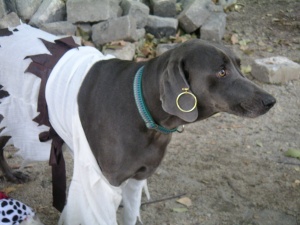 But I don’t wanna be a pirate! 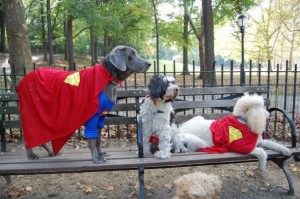 She’s got nerve calling me a witch when she put me in a tutu.

Un bacio for Nan. Our first friend from NYC to visit us 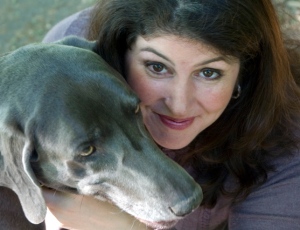