I’ve hit the ground running in January after a pretty miserable past couple of months.  As December came to a close, and with only a few hundred euro left in my bank account and no foreseeable work in sight, I was way past panic and into a deep depression.  This was not helped by about a month of rain and grey skies.  I tried to lighten the tone on my last few posts, but the reality is I have been struggling to keep my head above water and wasn’t in the mood to write anything.  I hadn’t realized when I started working on my book about surviving my first year in Tuscany that it would actually come down to surviving.  But I am still here, I have a little work this month and I’ll catch you up….

Cinder and I both had our first experiences with the Italian health system last month.  I had my first trip to the ginecologo, which I’m sorry to report is just as discomfiting as in the U.S.  You do get seen pretty quickly when you go to a private doctor (which you do if you don’t have status like me) and when they write you a prescription for something, you can refill it as many times as you want because the pharmacy gives it back to you!  The most surprising thing to me was the doctor gave me her personal cell phone number and told me to call whenever I needed her.

Cinder had an ear infection brought on by some type of food allergy.  I think I’ve finally isolated the culprit, which was a “New and Improved” version of her dog food.  I watched her shaking her head and scratching uncomfortably for a few days, giving her an antihistamine and willing her to get better because I remember how costly our trips to the vet have always been.  I finally asked Marinella if she could take us to see her son Giacomo who is a veterinarian (in training).  He saw Cinder, diagnosed her infection gave her some drops and we were on our way.  He even cut her toe nails which have always been an issue and in New York it took four vet techs to hold her down for this process.  He did it alone, with a little full body tackle assist from me.  The remarkable thing was that he refused payment as it was our first visit.  We gratefully made him some chocolate chip cookies as a thank you.  Cinder’s prescription was filled at the same pharmacy where the humans go and this gave me more than a moment’s pause.  Like with the people prescription, they gave it back to me so I guess we can use it again if we need to.

The only real good news at the end of December was that my last document that I’ve been awaiting for nine months, finally arrived.  I was at the Comune bright and early the Monday after Christmas with all of my paperwork in hand.  Poor Vania the woman who has been helping with this process, was on her way out the door with a severe flu, but when she saw the paper, she took off her coat and immediately started putting my file together.  Now I wait for another couple of months for everything to be checked over and if there are no problems I will be receiving my Italian Citizenship.  And for me, at this point, the biggest benefit will be being able to work.

As January opened, my parents agreed to give me a small loan so that I can make it through January and February and I am grateful for that.  I have a new student who started this week who is extremely motivated and tells me he’s bringing me five other students for English lessons.  I also met with the chef Iacopo who was going to do the cooking school with the lawyer.  He just opened his own restaurant and we had a good talk about work.  He offered to pay me in meals as he doesn’t have much business yet, but I think when things pick up it’s a definite possibility.  I can’t really work for him “nero” because the office that checks on those things is right across the street from his restaurant.  They are sure to be regular visitors.

I am still doing babysitting with the kids and I’m now searching for a cheaper apartment for when my lease is up.  This place is great, but over our budget.  Pretty much everyone in town has told me I’m paying too much. Antonella and Anna have both let me know that they have apartments they rent which may be coming available in the next couple of months.  So I am going to check them out.  Both are much more economical than my place.  The biggest expenses here are the water and the gas and there’s no way to know how much the bills are going to be.  I’ve heard horror stories about gas bills and so our thermostat is set at a chilly 50 degrees.  Cinder spends most of her day under her blanket dreaming of spring!

So that’s it.  Oh and I ended my romance with my fruit vendor, but we are still friends.  It was time because we were both getting a little too attached.   Anyway, he wanted to give me free fruit forever, but I didn’t feel right about that so my “rate” is 3 euro each week.

I hope everyone’s year is getting off to a good start and that this year brings lots of love and prosperity for all of us. 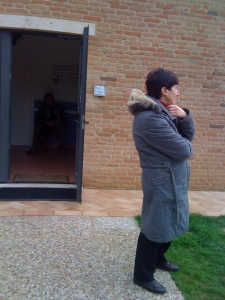 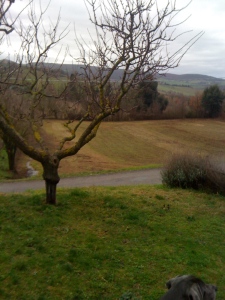 Cinder can't believe the view at the Vet's office 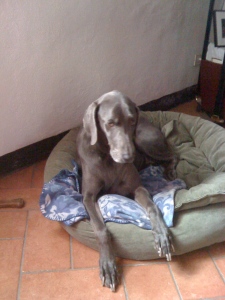 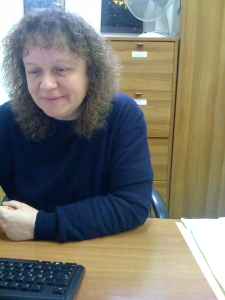 Vania prepares the paperwork for my citizenship application 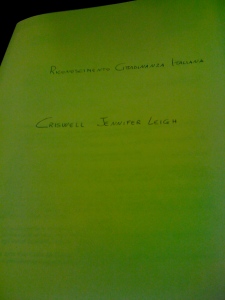 The official file...now I wait

One thought on “New Year…new resolve”