This week brought the first snow.  First a dusting on Thursday and then a couple of inches over the weekend.  Nothing makes me happier than the first snow of the season.  And I realize for those of my friends who live on the East Coast, you got a whole lot more “happiness” than I did, but still Cinder and I enjoyed playing in the snow.  Not to mention that we didn’t have to contend with the over-salting that they did in New York with all sorts of toxic chemicals.  Here people will sprinkle a little table salt outside their stores, but otherwise you are pretty much on your own.  When we went to the market in the falling snow on Thursday, Cinder was quite admired in her pink coat that was oh so fashionable in New York…okay she wasn’t so much admired as pitied that I was subjecting her to wearing clothing.  But if people knew how much she shakes and carries on when she is cold, they’d realize she is happy to be sporting it.

The temperatures got very cold after the snow came so now it’s all kind of icy and crispy, but still pretty.  I had yet another of my idiotic Americana experiences yesterday when I hung my laundry outside.  Granted it did seem a trifle cold for hanging laundry, but I saw Marinella put hers out so I decided better to at least try.  Then I forgot about it.  When I went to retrieve it last night, it was frozen solid.  To the point where it sounded like the cracking of a falling tree when I tried to pull it off the line.  At first I debated leaving it, but then I just tugged and tugged until the sheets broke free of the line.  I’m not exaggerating when I say they actually stood on end.  I wish I’d photographed the moment for posterity, but it was documented because Pippo stopped by and just shook his head sadly when he saw what I was up to.  I live to amuse.

I received my first Christmas card today.  It’s only about the third piece of mail I’ve gotten here in eight months so I was pretty excited.  Especially to see the 30 euro tucked inside.  THANK YOU, DARYL.   I also received a fedex from my parents with my along awaited document for my citizenship application.  My first Christmas miracle and I can now FINALLY get my application in progress.  Hopefully work will follow soon.  I am sad to report I didn’t get the dish washing job in Pienza because the manager wanted someone to work nights and there is no bus at night.  So I have no way of getting there.  Needless to say finding out that you can’t get hired to wash dishes is fairly depressing!

I’m doing a little baking, having decided to live on tuna and eggs for a week so I can bake my usual banana bread loaves for my new friends.  This has definitely elevated my Christmas spirits.  My neighbor Carlotta who is in the same boat that I am with work (except that she has a husband with a good job) brought me a homemade apple tart yesterday and we had a nice chat.  I’m going to dinner on Christmas Eve at the home of my students at Poliziano.  The mom, Anna, told me that I’m part of the family now and I thought that was really sweet.  I’m heading there this afternoon for our lesson and for dinner with the gang.  But first, Cinder and I have a date in the snow.  Seeing her act like a puppy as she runs around is enough to make me forget that’s it’s twenty degrees.

First snow falls on the walk to the market 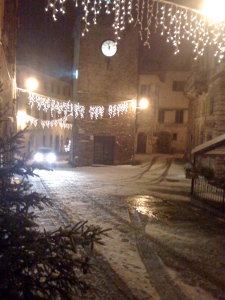 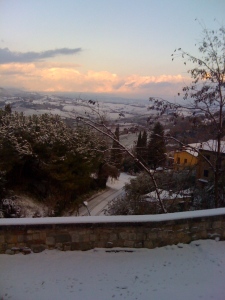 The view from my window

More snow falls in the afternoon

One thought on “La Neve”