I was having a chat with Antonella yesterday at her grocery store and she mentioned she was making Spaghetti Carbonara for pranzo.  We regularly talk about cooking and share recipes, so when she asked if I knew how to make a carbonara, I admitted I’d never attempted it.  In the past the reason for this was a slight squeamishness about the egg at the end.  But since I’m on quite the austerity plan at the moment, a recipe with only a few ingredients sounded just about right and I decided to try it.  And it was so delicious, that now I have to share it!

Forget what you know about Carbonara with cream, or wine, or even onions.  This recipe has pancetta, egg, a little parmesan cheese and black pepper.  BASTA!

Cook pasta.   In separate pan, saute the cubed pancetta over medium heat until crispy.  Beat one egg and to this add some shredded parmesan and abundant black pepper.  Some recipes do this at the end, but mixing it before adding it to the pasta worked well.  You can also hold the egg mixture over the boiling water while cooking your spaghetti.  Supposedly it makes it a little creamier.  For me, it made me feel better to get the egg a little warmed.

Add the cooked spaghetti to the pancetta and toss together.  I added a little cooking water too.  Then add the egg mixture.  Remove from heat and toss in pan until fully incorporated.  You can add more cheese or pepper at this point if you want.

Here’s a picture of the end result.  It was delizioso!  I didn’t take pictures of the cooking part, but honestly it doesn’t get much simpler than this. 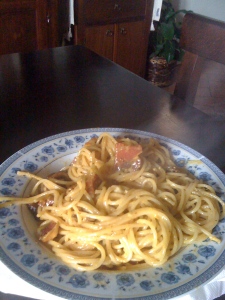 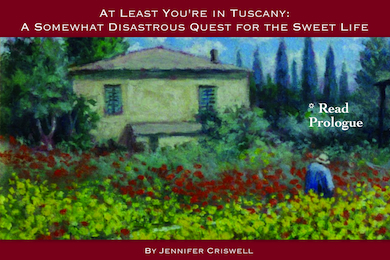