There is no Halloween as we know it in Italy.  There are no carved pumpkins grinning from doorways or demented looking witches and demons on display.  Montepulciano boasts one shop which had a few masks and a couple of rubber spiders.  Despite this, however, in recent years some shopkeepers have gotten into the swing of providing candy to small clusters of trick o’treaters.  And there was much anticipation this year for Bonnie’s gang of five to show them how it’s done.  I was a little concerned beforehand because Caterina had told me that some of the less enthusiastic shop owners had sent kids away last year, so  I went around early in the day yesterday to shops where I’ve made acquaintances and covertly inquired whether they would be handing out candy in the evening.

Bonnie found costumes for the kids in Chiusi and organized some festivities with some of their classmates for last night.  I helped with the kids during the day and then took Natalie to a birthday party for one of her schoolmates.  Natalie went in costume and as I walked up the street with her in her orange witch ensemble, reactions were much the same as when I would dress up Cinder each year in New York:  disbelief coupled with amusement.  It didn’t seem to bother her that none of the other kids at the party were costumed.

While Halloween might not be high on the priority list here, hard on it’s heels comes All Saints Day, or the Day of the Dead.  This is today and is a national holiday.  It’s said to be the day when the souls of loved ones come back to the earth to visit.  Antonella’s shop has a special bread named for the day, pane della morte, which she’s been selling all month.  It sounds macabre but is basically a tasty raisin nut bread.

With the start of November also comes the annual harvesting of the olives.  And yes, it looks like I’ll be giving this a try as well.  My friends here have joked that it will be easier for me than the vendemmia since I’m tall and can easily reach the tree branches.  Speriamo! 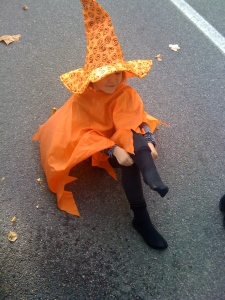 Natalie puts the finishing touches on her costume 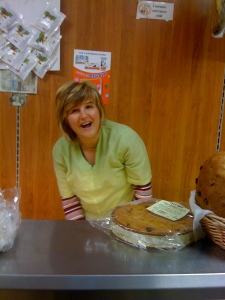 Antonella with the pane della morte