This week was all about stretching myself a little beyond my comfort zone…both literally and figuratively.  The literal came when my laundry cord, which I had attempted to salvage with duct tape, finally breathed it’s last.  I was running late for class and had just put my sopping wet duvet cover out to dry and was taking Cinder for her pre-class outing.  I looked up at my window to admire my handiwork, since I still can’t quite believe I’m hanging laundry out to dry, and there was no laundry.  The duvet cover and the cord were in a heap on the ground.  I did my first vocal Italian curse…a loud “VAFFANCULO,” which I’m sure all of my neighbors heard.  I was late getting to class and wasn’t in the best mood.  It wasn’t helped when Alberto told me that this was a small thing (piccola cosa) and not to be upset.  Sure, easy for him to say.  I had no idea how I was going to hang out of my window to install a new laundry cord.  I attempted to get on with the class, but I was definitely out of sorts.  Then my last pen died.  This of course is another piccola cosa, but I’ve been doing a lot of writing here and I like to use ink pens.  I hate ballpoints.  I hadn’t seen any stores with office supplies, so I wasn’t sure where to start looking.

That afternoon, after a few minutes of wishing I had a man I could order in to take care of pesky things like installing a laundry line, I determined to handle it myself.  But first I started with the pens, since it seemed like an easier accomplishment.  Alberto had gently let me know that the libreria (bookstore) which I’ve been into about five times also has pens and paper.  Observant writer that I am, I hadn’t noticed this on previous visits.  In my defense, I usually have Cinder with me and am desperately trying to avoid having her step on anyone’s toes in the confined space with her gigantic toenails!  I asked the owner about the pens, and I’ll admit I only asked for one.  And here’s why.  In Italian, the plural of pen is Le penne.  Not to be confused with il pene, which means penis.  I was pretty sure after my morning that instead of asking for pens, I’d put my foot in it and ask for a penis!  These are the things that happen when you are learning a new language and I make at least two flubs of this sort on a daily basis.  So after happily collecting Le penne, which I’m happy to report are the same brand  I always use, I decided to tackle the hardware store.

The woman who runs the store knows me well by now.  I’ve been in there for laundry clips, duct tape, lightbulbs, a laundry rack, and now the fifth visit, a new filo dei panni.  I had already measured the length I needed, being the semi-handy girl that I am, and had converted it into meters.  I was able to successfully mime and explain that I needed a new cord and the little silver thingy to secure it.   The woman asked me, as she does every time I come in, if I have a fidenzato yet.  “No,” I tell her.  “Non ancora.  It’s not a priority right now.”  “Brava,” she tells me.  Not sure why she thinks it’s so great that I’m not reliant on a man, but maybe I’ll get that story on another visit.  She tells me exactly what I need to repair the cord and wishes me luck.

The next day I tackle the laundry line, and my first Italian hair cut and color.  This may sound like another small thing, but as most women know any time you go to a new salon and use a new colorist, it’s always a little risky.  So add to that my limited vocabulary about hair care and you can see why I was a little concerned.  Laura’s sister-in-law is a parucchiera, (hair stylist) and had just opened a new shop.  And when I say “just” I mean I was the first client.  I tried not to let this add to my anxiety.  I had met Samantha a few times before Laura’s wedding, so I felt comfortable babbling on in my better-but-definitely-not-yet-fluent Italian, with lots of stops and starts to check the dictionary, about how I would like my hair.  To my relief, Samantha is a great colorist and gave a terrific cut and blow out as well.  I’m not sure if I got a friends and family rate, but I paid about 1/8 of what I paid in New York, for the same thing.

After my vocabulary calisthenics of the morning, my next task was the laundry line.  And when I tell you there was some stretching, I mean it.  I was hanging so far out of my window in my attempt to reach the ends of the cord that I was afraid it was all going to end very badly.  I asked Cinder to hold onto my legs, but she was of little help other than to look on worriedly from her bed.

I somehow managed to secure the line and it works.  It’s not perfect, but I’m satisfied and my newly re-laundered duvet took it for a test drive and at last look was still hanging.

My last bit of stretching this week came in the form of a cooking class.  Alberto told me that there was a writer at the school this week who wanted to take a cooking course and needed someone to translate for her because the chef didn’t speak a word of English.  I think I said yes before he even finished speaking.  I’ve been dying to take a cooking class and this seemed like a fun way to get started.  I also was pleased that they thought my Italian had improved to the point where I could act as a translator!!!

The writer, Sarah-Kate Lynch is from New Zealand and was taking the class with another friend from the school.  (I checked out her website and her books sound good.)  It was a very fun afternoon.  Sarah-Kate had requested to learn four desserts, so the recipes we learned were La torta della nonna,  including the pasta frolla (which is the dough), tiramisu, a crostata and cantucci, the traditional biscotti (ish) cookie of Toscana.  Ginny, the other woman from Il Sasso, is an artist from Illinois and is traveling around Italy for a month by herself.  I did something similar almost ten years ago, so I liked her right away.  Both women were fun and the chef was gorgeous so it was a great time.  I did my best translating both their questions for the chef and his instructions to them.  The chef is going to forward the recipes to the school, so I hope to try practicing some of them on my own.

It was nice to have a “sweet” end to week as I’d found out earlier in the day that I’m technically not allowed to work until my citizenship is approved.  This could be months away!  I will just have to think of some other creative ways to stretch myself over the next couple of weeks.  Until then, I’d better go post some more flyers for English lessons!

Samantha, at her new salon

Sarah-Kate and Ginny at the cooking lesson

Fabio telling us what a wonderful job we've done and how gorgeous we are...I think! 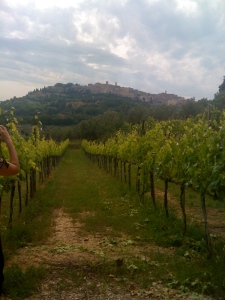 A view of Montepulciano as we walk home