I knew Italy would be different.  After all, the point of moving to this wondrous country was to embrace a very different lifestyle from the hurried pace of New York.  And now that I’m in my third week here, I can definitely say there are things that take some getting used to.  Below are some of the things Cinder and I have come to learn are very Italian.

The first is my shower.  The shower itself is not remarkable except for the fact that it’s designed for a gnome.  What looked like a tub, on further inspection was revealed to be a tub-shaped trough.  I can barely stand with my two feet together as it slopes upward at a sharp angle.  I’m not sure why I haven’t mentioned my shower before since bathing in it inspires fear every day.  When I first learned that the apartment’s hot water heater was in my shower, I didn’t really think about what that meant.  Until the morning I stood facing it, and could plainly see the flames shooting up inside.  It immediately called to mind the scene in Enchanted April where the Italian housestaff are warning the Brits that the shower is “pericoloso” or dangerous.  It’s no wonder everyone has pictures of the Virgin Mary everywhere.  I start my morning with a fervent prayer that I won’t be blown to bits in my effort to be clean.

The sounds I hear outside my window are very different from New York.  Sirens have been replaced with church bells.  And I have to say they are quite lovely and not at all accusatory as some you may have heard.  They chime every half hour and when the two churches surrounding us chime together, it’s enough to make you pause whatever you’re doing.  Then there are the birds.  We have tons.  Not Alfred Hitchcock tons, but enough that I clean bird poop off our porch with some regularity.  When I was talking with my friend William on the weekend, he asked me if Cinder was playing with a squeaky toy.  “No, it’s just the birds,” I told him.  We also hear sounds reminiscent of New York, but with far less frequency–cars driving by (maybe three an hour), the occasional dog barking, and this past Saturday night, a drunken crazy person screaming.  I actually felt a tug of homesickness at that one.  My apartment in New York was around the corner from a bar and the yells of drunks and crazies were an anticipated part of my night’s sleep.

The grocery store is still an experience which causes me some anxiety.  If you don’t buy pre-packaged vegetables, you have to weigh and put a price tag on whatever you’re buying.  It sounds easy enough, but the machine that spits out the ticket has become my nemesis.  Twice I gave up.  On my last attempt, I finally asked a kind-looking old woman for help.  She pressed a couple of buttons and presto the tag came out.  Oh so, you press the picture of what you want and then the amount? I felt like quite the “imbecile,” but I got my onions dammit.  The other phenomenon that is quite different here is that when you go to pay, they like for you to give them the exact amount.  Unlike New York, where if you even reach to start counting exact change, you will be given the stink eye by everyone behind you, here it’s expected that you will sort through your coin purse for at least two or three minutes.  Doing this sets you apart from the tourists, and I get approving “Bravas” everywhere I go when I do it.

Today I went to the Farmacia in search of some Pepcid for Cinder.  I’ve been trying to go for three days, but they’ve been closed and I couldn’t understand Massimo and Angela well enough to figure out why.  I went armed with the Italian name for the drug and then proceeded to explain Cinder’s stomach troubles of the last month.  The woman there was quite helpful and told me that while they don’t have it in, she would order it in for me tomorrow.  Apparently Italians don’t use Pepcid or Pept-Bismol.  I’m guessing it’s because the abundant olive oil consumption coats, suits and relieves all on it’s own!  The pharmacy itself wasn’t that out of the ordinary, except if you note the condom vending machine outside.  Perhaps since the hours of operation are questionable, they don’t want to be responsible for any young lovers going unprotected.

While I was sitting on my porch on Sunday, two well-dressed men began walking up the path near my house.  Instinctively, I knew something wasn’t right about them and as they drew near, I spied the “watchtower” pamphlet.  Jehovah’s Witnesses in Italy?  I apologized for my Italian and quickly dragged Cinder inside.  It was perhaps the one moment in the past three weeks where I was thrilled that I couldn’t understand the conversation.

And then there’s Italian television.  It basically sucks.  This is okay since I’m trying to spend a very small portion of my day actually watching television.  But if I do want to “surf” my six channels, then the offerings range from Italian cartoons to game shows with scantily clad hosts, to dubbed American programming.  This last one wouldn’t be bad until you start wondering who is actually choosing which shows they dub.  Quincy MD, Nash Bridges with Don Johnson, and the dregs of the offerings Renegade with Lorenzo Lamas.  I did spy MacGyver the other day, which may come in handy if I need to jerry-rig anything around the house!  American films are actually dubbed very well and I’ll admit I laughed just as heartily at the “Odd Couple” in Italian.  Hearing my favorite characters the Pigeon sisters referred to as “Le Sorrelle Piccione” tickled me no end!  As for Italian news, I have to say I like a country who feels compelled to give you your horoscope with the headlines.  The weather is usually done by some sort of uniformed colonel or some other ranking, scary-looking uniformed man.  And when he tells me it’s going to be a nice day, I believe him.  I mean he is wearing a uniform after all!

I’ve already mentioned the laundry, so I won’t belabor that.  I’ve gotten quite adept at hanging my clothes outside while hiding my underwear and bras behind a layer of sheets.  I just can’t let them fly as others seem to do, but when I tried drying them inside on the mechanism I bought at the hardware store, they took three days to dry!

The people here have been lovely.  From my gorgeous neighbor (who also has a gorgeous wife) who plucked the weeds next to our apartment, to the store owners I am slowly getting to know, to Mariela, who tells me today we are going for a walk (passeggiata) in search of work.  It’s really not within my skill-set to argue with an Italian mama, so I will go.  I’m trying to say “Si” to the situations that present themselves each day and to take time to just enjoy this transition, as terrifying as it may be at times.  And, believe me when I’m in the shower, it’s pretty frickin’ terrifying! 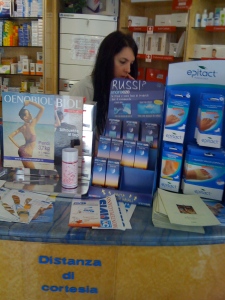 Our pharmacist trying to locate Pepcid for Cinder 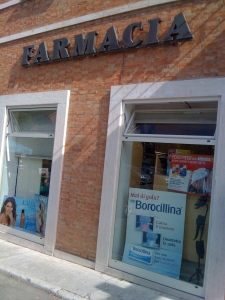 Our pharmacy dispenses advice inside and condoms outside 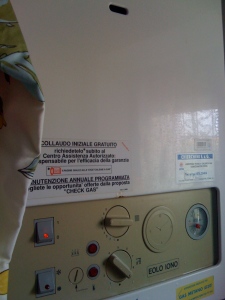 The flaming death trap, I mean water heater, in my bathtub 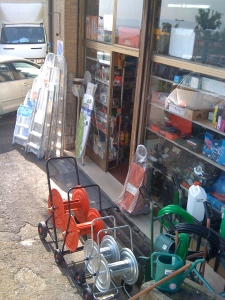 Our local hardware store--comforting in it's universal appeal