Cinder and I have developed an energetic mid morning routine:  a long walk (passeggiata) in the countryside.  Part of the reason for the mid morning jaunt is that Cinder still insists on rising early, so she’s ready for another outing by 10:30 or so.  Thankfully she seems to have forgotten that she liked to rise at 5:00, or maybe is adjusting herself to the Italian lifestyle, but she’s been sleeping to at least 6:30 which for me is bliss.  It is a little disconcerting to see the sun up as we walk since I was so used to our predawn outings in New York.  But I’m adjusting admirably!

The only wildlife we’ve encountered on our strolls have been some rather ferocious-sounding dogs protecting their property.  We had a close call yesterday when one realized his gate was open and ran into the street.  We had a face off for about thirty seconds and then he ran back inside.  Either Cinder’s New York toughness scared him off, or I’ve built up enough good dog karma in my six years of dog walking!  I hastened to close his fence just in case he decided to regroup, but he seemed satisfied to bark at us from a distance.  For Cinder’s part she doesn’t respond to the barking and I wonder if she doesn’t understand the Italian.  The tone seems clear enough to me, but she only gives them a vaguely confused look and continues on her walk.  I think she may be so excited to be experiencing all of this nature that she doesn’t have time to pity the poor dogs closed off behind their fences.

I’ve been slightly concerned for Cinder with her arthritis that she would struggle on the hills.  But if anyone is struggling it’s me.  There’s no such thing as “flat” in Montepulciano.  I’m building my endurance slowly, figuring if my eleven year old arthritic dog can do it, well then I should be able to as well.  The problem initially was I was trying to walk at my New York pace.  Well, after day two I realized that’s just not going to work.  The key I’ve found is slow and steady.  “Be the tortoise.”  We pass lots of older Italians who calmly plod up the hills at their own pace, unhurried and with all of their breath in tact.  Once you learn this lesson, the hills are actually not bad.

Because today is the first of May, there is a huge fair in Montepulciano.  There are so many people that you can’t even get down the streets, and Laura called me to warn me to keep a hand on my purse since thieves like to frequent the festivities as well as tourists.  I decided not to subject Cinder to this chaos and ventured out alone and browsed.  I only brought a little cash with me, which was a good thing.  Everything was so cheap and tempting that it was all I could do not to rush back and grab more money to shop.  I bought some roasted chicken and porchetta for Cinder which she’d been longing for yesterday and some tomatoes and pecorino for me.  I also bought my rug.

Trying to leave the chaos of the fair behind us, we ventured out for our walk.  The small country road which normally has little to no traffic today was lined with cars on both sides.  Parents pushing strollers, and couples off to enjoy the festivities, ambled back and forth.  Cinder and I pulled over frequently so as to not get squashed by traffic.

With our first real taste of sunshine, we meandered down the mountain.  I could have walked for hours.  The only thing keeping me in check was the knowledge that we still had to head back up.  I knew I could make it, but I wasn’t sure how much I could push Cinder.  She made this point for me by falling into a drainage ditch, disappearing except for her head.  Her weakened back legs couldn’t get out, but I managed to pull her out by wrapping the leash around my waist and heaving her.  Thankfully she was okay, because I have no idea how I would have gotten her home otherwise.  She seemed undaunted  by her experience, still gamely trying to poke her head in every crevice along our route.  No doubt she’ll be sore tomorrow.

We ended our walk with a standoff with the orange kitty that lives next door.  He’s one of five cats who wander around.  There is also a big black and white dog who lives with the cats and he’s has taken a shine to Cinder.  She’s definitely playing hard to get and hasn’t given him so much as a second look!  Unlike me, Cinder has yet to appreciate the beauty of Italian men.

We have the whole day ahead and with the gorgeous sun shining, I think we’ll spend it outside.  I know one girl who will enjoy her roasted chicken after her exertions of the morning! 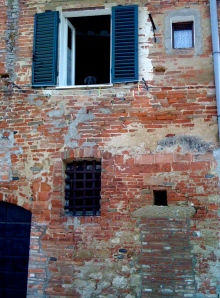 Cinder pokes her head out of our window 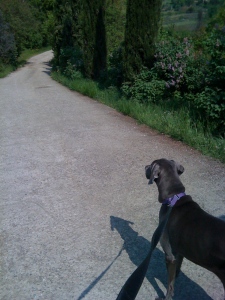 "It's no Riverside Park, but this will do." 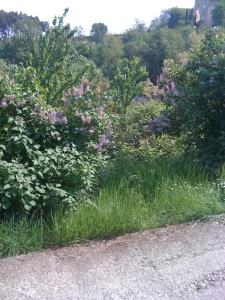 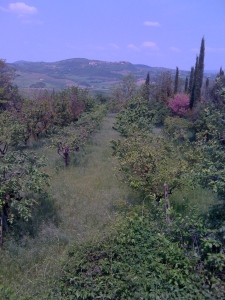 My favorite part of Tuscany - the olive trees and grape vines